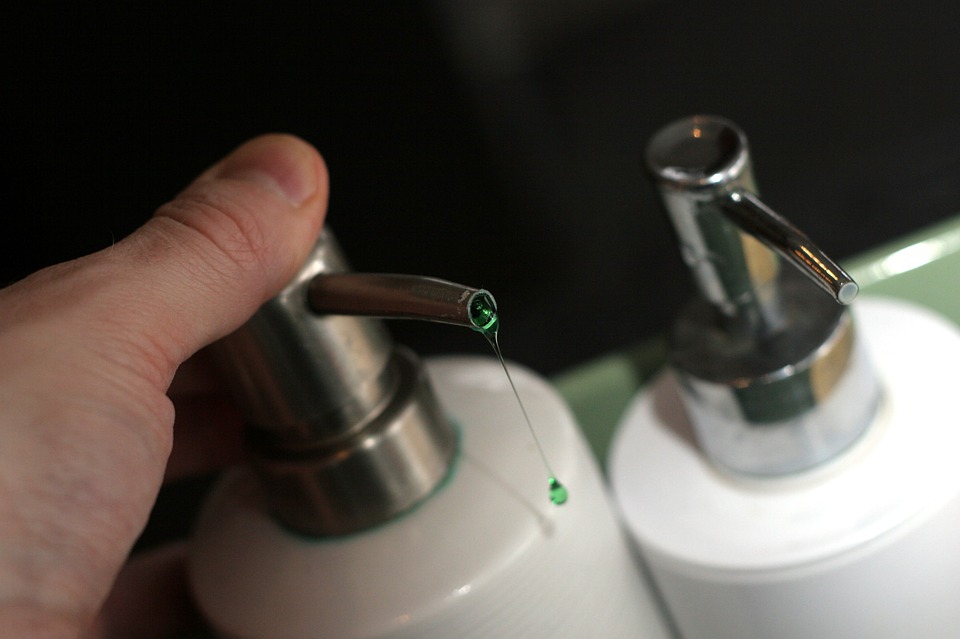 If you are one of the estimated billions of people worldwide who suffer from the skin disorder keratosis pilaris (KP)– characterized by hard, red bumps on areas of skin over your hair follicles, then you have probably attempted to clear your skin with traditional lotions and exfoliants. For some, this may be enough to clear things up, but for many others, the common skin care regimen is not enough to treat their KP effectively.

If you have tried to treat your KP and have suffered from mixed results or worse, then you might find the relief you need from Alpha Hydroxy Acids (AHA), the active ingredients in common KP treatments like the popular AmLactin. Today’s look at AmLactin reviews the most popular—and many say the most effective—treatment for KP on the market.

Unlike other AmLactin reviews you might find, we not only researched AmLactin and its effectiveness in treating KP, but we also examined how it stands up against other common KP treatments you can find on the market to help you determine whether AmLactin is the right product for you.

AmLactin is a brand of moisturizer that has proven itself an effective treatment for people suffering from KP. It is a fragrance-free, non-greasy lotion that contains 12% lactic acid, the ingredient that makes AmLactin such a successful treatment for KP. This active ingredient helps to bind water within the skin to retain the body’s natural moisture, which can effectively reduce the occurrence of excessively dry skin. Most importantly, the exfoliating properties of AHAs reduce, over time, the occurrence and severity of KP.

AmLactin is usually bottled like any other lotion you might find, but what sets AmLactin apart is that, until recently, it was a prescription only treatment. Since becoming an over-the-counter product, it has taken its place in the moisturizer aisle as the popular go-to moisturizer for people suffering from a variety of skin disorders, including KP.

You can find AmLactin sold in several different sizes and varieties, ranging from 2 oz travel-sized bottles to larger, 20 oz pump-bottles, with different added features. Our examination of AmLactin reviews the 7.9 oz bottle of AmLactin 12% Moisturizing Lotion for comparison purposes, but any variety of AmLactin will feature the same standard treatment benefits for KP as any other.

Depending on the size of the bottle, AmLactin can range anywhere from $6 to $28, making it an affordable treatment option for those looking to clear up their KP. You can find the 7.9 oz bottle for around $13.

We picked a couple of KP treatment products and examined them according to price, ease of use, and the quality of the product, so this look at AmLactin reviews several alternative treatments options as well, giving you the information you need to determine which option is best for you.

The other treatments we examined are:

AmLactin lotion is the go-to treatment option for those suffering from keratosis pilaris. It is widely available and not any more expensive than regular lotions, so it’s not surprising that most discussions of KP inevitably include various AmLactin reviews and endorsements. If you suffer from KP, then you will want to see how well AmLactin lotion works for you.

The second least expensive option by volume of those reviewed, AmLactin lotion is a good option for anyone’s budget. Given that the formulation of AmLactin reviews tend to highlight that it is a low price option that is available at most drugstores and pharmacies. This will probably be the first lotion you’ll want to try when treating your KP.

This is as easy to use as any other lotion in your regimen, with a couple of caveats. First, the exfoliant in the lotion effectively break down tough, dead skin cells on your body, so don’t use it on sensitive, sunburnt, or otherwise damaged skin. Second, since this lotion breaks up dead skin cells and stimulates new cell growth, this means that younger, more sensitive skin will be exposed to the more direct sunlight than it’s used to. It is essential to wear at least SPF 30 sunscreen when going outside after using this product.

For a KP treatment as inexpensive as AmLactin, it does not sacrifice on quality and could just as easily be featured in more elite boutiques instead of in the moisturizer aisle of the corner drugstore. 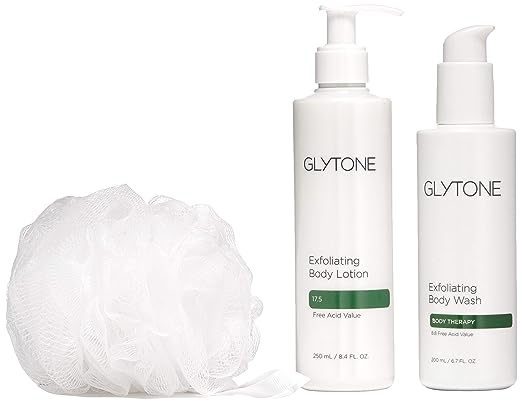 The Glytone KP Kit is a common alternative treatment to AmLactin and is one that you’ll often see in other AmLactin reviews. Like AmLactin, it uses AHAs to exfoliate your skin, but unlike AmLactin, Glytone KP is a two-stage system. The first stage is a specially formulated bodywash that exfoliates dead skin cells and rough bumps, smoothing out the skin as it works.

This leaves the skin with a fresh, even skin tone and a noticeable reduction in the prevalence of KP when used over time. The second stage is an after-shower lotion that, like the bodywash, exfoliates the skin and seals in moisture. It is also reported to reduce the dark spots caused by overexposure to the Sun while softening and revitalizing your skin.

This is by far the most expensive option we reviewed. You will end up spending about $70 for the Glytone KP Kit, so it’s probably a good idea to only use this system if other, less expensive treatments do not give you the results you are looking for or if you experience an adverse reaction to KP treatments.

Each of the stages in this system are easy to use—stage one is a body wash while stage two is simply applying a lotion to affected areas of the skin—but the system is designed so that you must use both as directed to be most effective, so naturally, it takes more work commitment to achieve the desired results.

Just like AmLactin, the Glytone KP kit will expose newer skin cells to more intense sun exposure than they have been used to, so it’s important to wear at least SPF 30 sunscreen when going outside while using this product.

When used as directed, the Glytone KP Kit is very effective at reducing the prevalence of KP in the treated areas. The active ingredient in the Glytone KP Kit (glycolic acid) is a different AHA than the one used in the most popular formulation of AmLactin reviews. Anyone who experiences an adverse reaction to the lactic acid inAmLactin will want to try the Glytone KP kit.

Essentially, there is no difference between the two. The active ingredients in AmLactin and Perrigo Ammonium Lactate Lotion are identical so most people can expect the same results with either one. The difference for most people will come down to the value of the product and its availability. You are almost certain to find AmLactin in most major retail pharmacies while the same can’t be said of Perrigo lotion. However, if you do find Perrigo lotion in your local pharmacy, odds are you will get significantly more of it than with a bottle of AmLactin at the same or nearly the same price. Beyond that, it will essentially be a matter of preference.

A 14 oz bottle of Perrigo Ammonium Lactate Lotion should cost you around $15, which is almost twice as much lotion as AmLactin’s for a couple of dollars more. If you don’t have a particular preference for AmLactin and your skin is tolerant of the inactive ingredient formulation in Perrigo Ammonium Lactate Lotion than Perrigo is by far the best option for treating your KP. You will go through bottles of this lotion over the years, so the cost savings will start adding up fast.

Just like AmLactin, you use it like any other lotion, rubbing it into affected areas of the skin until absorbed. Some find the Perrigo lotion to be thinner than AmLactin and more quickly absorbed, but for many, there will be no noticeable difference. Again, it will essentially come down to one’s personal preference for one over the other.

The active ingredient of Perrigo Ammonium Lactate Lotion is the same as AmLactin’s, and this is the ingredient that is found to be most effective when treating KP. As such, it shares the highest quality rating along with AmLactin as a treatment for KP. Though the individual lotions themselves will vary from one style of lotion to the next, the differences between the two are so minor that it comes down to personal preference.

The last product we looked at is DERMAdoctor KP Duty, a more boutique KP treatment lotion that may not be readily available at your local retailer. The active ingredient in DERMAdoctor KP Duty is glycolic acid, not lactic acid, so if you have an adverse reaction to AmLactin or Perrigo, this is another alternative you can look at along with the Glytone KP kit.

Of all the products we examined, this is also the only one that reports being cruelty-free, so if you have concerns about whether a product has been tested on animals, this is most likely the best option for you.

The standard sized 4 oz tube of DERMAdoctor KP Duty will cost you around $35, making it the second most expensive option of the products we looked at. If you have an adverse reaction to lactic acid and want to see if glycolic acid might be a better option, this is a less hefty investment than the Glytone KP kit.

Like the other lotions we reviewed, this one is applied to the affected area the same way you would apply any other lotion.

The DERMAdoctor KP Duty is very effective for most people with KP though it is reportedly not as effective as the other products we examined. The main benefit of DERMAdoctor KP Duty though is for those who need to use a glycolic acid-based treatment instead of one made from lactic acid. If that sounds like you, this is an easy to use and effective alternative lotion that doesn’t require as much investment or commitment as the Glytone KP kit.

In the end, AmLactin is still the best over-the-counter KP treatment overall, earning 5 out of 5 Stars. It is the most popular, most effective, and the most readily available keratosis pilaris treatment for most people. Unless you are one of the few who does not tolerate ammonium lactate very well or have an easily available supply of Perrigo or other off-label generic ammonium lactate lotion, AmLactin will be your best option for treating stubborn and persistent KP.