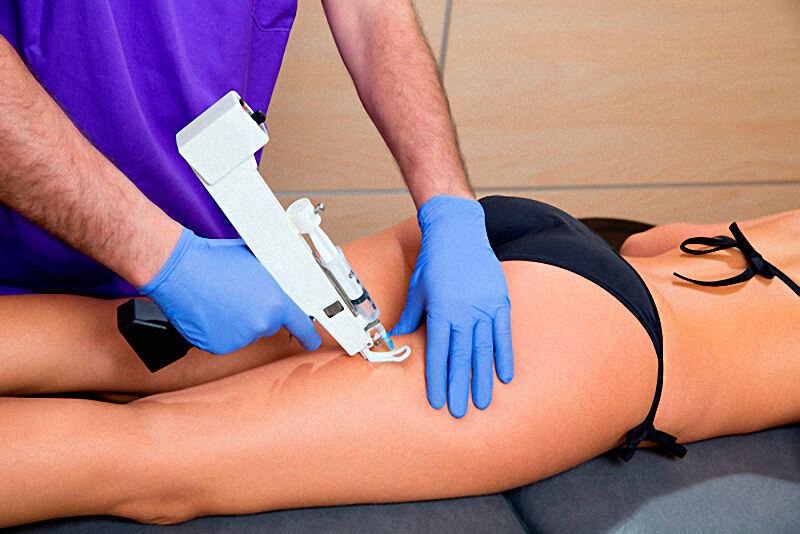 Men and women who are looking for ways to reduce the appearance of cellulite, scars, dark circles under their eyes and even stretch marks are discovering a beauty treatment known as carboxytherapy.

The nonsurgical procedure uses a tiny needle to inject carbon dioxide just beneath the skin’s surface in the effected area of the body. Carboxytherapy is intended to kick-start both circulation and the production of collagan, which can make skin look younger and healthier.

How Does Carboxytherapy Work?

Oxygen-rich red blood cells are carried from the lungs to the heart and from there throughout the human body. When these red blood cells run into an area of the body that has a high concentration of carbon dioxide, they release their oxygen. The empty cell then picks up the carbon dioxide and carries it back to the lungs, where it is exhaled.

Why is this principle so important for treating cellulite, dark under-eye circles and removing scars? All are thought to be caused, at least in part, by poor blood-flow. Carboxytherapy essentially tricks the area of the body being treated into thinking it needs more oxygen and less carbon dioxide.

Can Carboxytherapy Be Used for Treating Cellulite?

Carboxytheraphy can be used for the treatment of cellulite and for fat removal. Cellulite manifests itself as the appearance of dimpled skin that is caused by fat deposits just below the skin. Cellulite can most commonly be found in the abdomen, legs and pelvic region. Nonetheless, it can be found on any area of the human body.

Located in the subcutaneous layer of the skin, cellulite comes in three different categories:

Is Carboxytherapy Effective for Cellulite Removal?

The process of carboxytherapy for cellulite removal leaves the skin tighter, brighter and with a less dimpled appearance. The process weakens and destroys the fat cells by replacing carbon dioxide with oxygen.
Targeting the abdomen, arms, legs and buttocks, carboxytherapy for cellulite removal stimulates the production of collagen and improves its appearance with very little pain and discomfort to the patient.

One study called Carbon Dioxide Therapy in the Treatment of Cellulite: An Audit of Clinical Practice showed that carboxytherapy is safe and effective, with minor complications and pain that lasted no more than 30 minutes.

Another study, called Effectiveness of Carboxytherapy in the Treatment of Cellulite in Healthy Women: a Pilot Study, concluded that this treatment is effective in removing the cellulite in the buttocks region and posterior thighs of healthy women.

Multiple treatments of carboxytherapy for cellulite removal may be required to achieve the maximum result. It is also important to note that individual results may vary.

Advantages and Disadvantaqges According to User Reviews

Many women and men who have used carboxytherapy for cellulite removal have been pleased with the results they obtained as a result of the procedure. One reviewer who said she weighs 100 pounds and stands at 5 feet, 4 inches tall, said she was conscious about the cellulite on her thighs. After just two treatments, she said she can see a reduction in her cellulite, her thighs being much smoother and less dimply-looking.

Another reviewer, who said she was on a journey to renewed health and has gone from 220 to 198 pounds. She had began carboxytherapy for cellulite removal in the abdomen area before moving to the arms, legs, and buttocks. She said she experienced little discomfort as a result of the procedure. Furthermore, what pain she did experience was easily dealt with. This user said this cellulite removal method showed the quickest results.

Other reviews of the procedure were not so positive. One reviewer said that after ten treatments she had more fat and cellulite on her legs than when she began the treatment. However, most of the individuals who have tried carboxytherapy were satisfied with the result.

Carboxytherapy for Cellulite Side Effects

While the procedure is relatively risk-free to patients, there are a few side effects you need to be aware of before deciding to move forward with the treatment. Among them are:

If you experience any other symptoms, contact your medical professional immediately.

How Much Does Carboxytherapy for Cellulite Removal Cost?

The procedure often requires multiple treatment sessions and therefore can be pricey. Depending upon where you live, you should expect to pay between $100 and $150 per session. Most patients require a minimum of 10 sessions and may even require further treatments at a later time.

At a total cost of between $550 and $1,200, the price of the procedure can be high. However, most of those who have undergone the treatment have been pleased with the results they have obtained.

Keep in mind costs vary by clinic and complexity of the treatment. Be sure to consult with your health care provider about treatment costs. Also check if your insurance will cover a portion of the procedure.

If you’re looking for a less invasive and cheaper alternative to carboxytherapy, you may be interested in reading about the best anti-cellulite creams.

Carboxytherapy for cellulite removal is gaining in popularity in the United States afer being used in Europe for years. The procedure helps to reduce the appearance of stretch marks, dark under eye circles, and cellulite. It has also been proven effective in fat removal.

In addition, you can expect to suffer few, if any, detrimental side effects as a result of the nonsurgical treatment; it is done under the supervision of a doctor on an outpatient basis. There is also little to no recovery time required as a result of undergoing the procedure, which can results in more youthful looking skin.